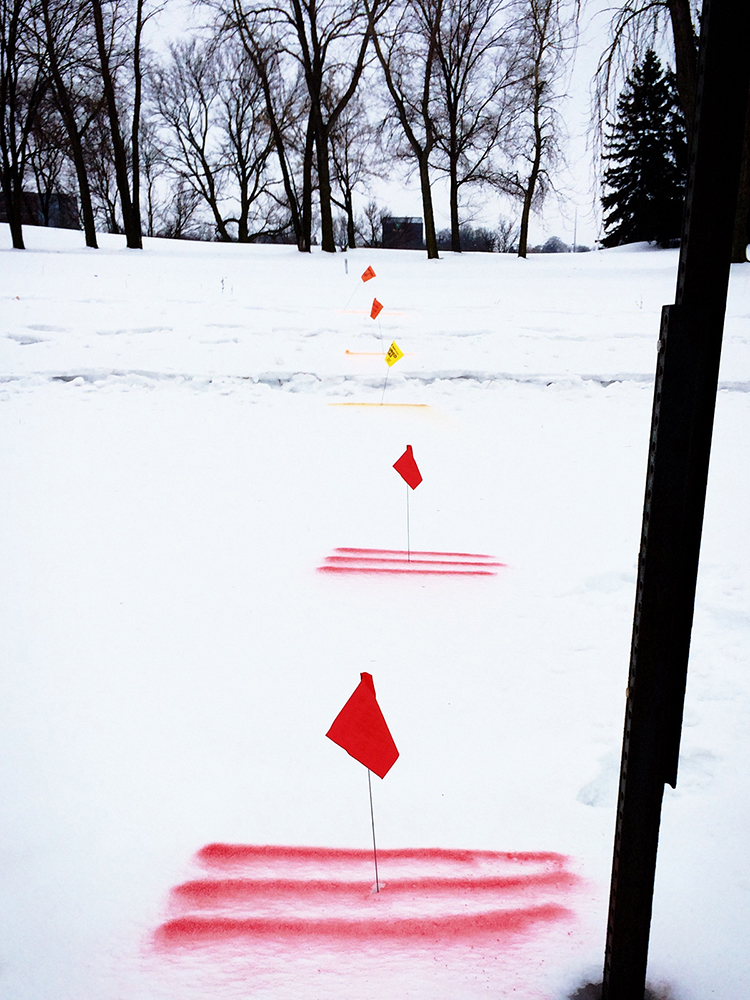 Michael Jensen began his career as a contract locator in 2009 and has spent the past three years as an engineering service tech at City of Austin Utilities. That’s more than a decade’s worth of Minnesota winters spent trudging through slush, snow and harsh temperatures to help prevent damages and keep the public safe.

As regular excavations taper off in late fall, it’s easy to assume that not much is happening once the ground freezes and the snow flies. Even though there aren’t as many routine locates, that doesn’t mean that the locator workload lightens.

Jensen says locators typically see more emergency tickets in winter, often due to water main breaks. He recalls one winter cold snap where Austin Utilities had to locate for water main breaks daily—and even received several requests for water main breaks in one day. There are always tickets for street signs and mailboxes. Power companies do pole replacements, and some excavators conduct directional drilling underneath the frost level.

There also are snow removal tickets, especially in areas where above-ground utility pedestals need to be located. (While Gopher State One Call typically only facilitates excavation tickets, those who have snow removal ticket inquiries are advised to contact GSOC directly to discuss how best to proceed.)

Jensen says that one of the biggest challenges is getting a ground rod in. He tends to try to find a sign or fencepost to use as a ground, or put the rod in near a foundation where the ground may be warmer. “We all have spools of wire in our truck. We might have to run it 50, 60, 100 feet to get back to your locator and then that's your ground,” he says. “You’ve got to get creative with it.”

Wearing gloves can mean a loss of dexterity, then there’s attempting to get marker flags in and dealing with locators and paint freezing up. “You’ve got to leave your vehicle running and keep the paint in there, then grab it and try to get some paint on the ground before it freezes back up,” Jensen explains. He sometimes uses a long drill bit to get flags into the frozen ground—but doing so requires extreme caution in order to avoid the situation spiraling into an emergency gas repair: “I'll drill a little pilot hole in the ground, but you have to be careful doing that; you don't want to be going too deep into the gas service that you just marked.”

Locators also have to look out for icy patches, icicles and ice dams, especially when near a building’s gas or electric meter. Some contractor locators take on a larger territory in winter months—so while there might be fewer locates to handle, they’re traveling longer distances in inclement weather.

Be diligent about checking ticket status. Begin work as soon as possible after receiving a positive response. “Wait your 48 hours [excluding holidays and weekends], but not much more,” Jensen advises. A variety of weather events can crop up unexpectedly: wind gusts, a sudden freeze or simply the snowplow coming through. “You're at a lot higher risk for damages during the winter,” he adds.

Keep the site accessible. It's up to the excavator or homeowner to remove snow and clear a path for the locator—not just for safety, but for accuracy. Jensen recalls a locate near a busy road where snow was piled in the boulevard almost to the top of his truck. While he could mark the boulevard, having feet of snow between marks and the ground could compromise accuracy. “Things that are deeper are typically harder to locate. [If] we're adding another four feet of snow, your marks aren't as accurate.”

Rethink how you white-line. Instead of marking excavation areas in white, Jensen says that locators prefer to see black paint used in the snow. “Black and white flags are great if an excavator has them,” he says. “If not, I encourage them to keep using their white flags, then hit them with a shot of black paint once they stick them in the snow. Another option is to use a wooden lathe painted black if the snow is deeper than the height of a locate flag.”

Try to stick to essential jobs in inclement weather. “Emergency water main breaks and things like that—we have to deal with that. That's not something that could wait,” says Jensen. But before beginning an excavation in the dead of winter, keep in mind that the weather can quickly throw a wrench in plans. “If I go and mark things and then the wind blows the snow over, all my paint is gone,” he explains.

Communicate. Winter excavations “definitely require a lot more communication between the excavator and the locator to do it safely,” says Jensen. “Try to communicate with your utilities and locators. Maybe put on the ticket, ‘Call to make arrangements for winter conditions,’ something like that. Then everybody can make a plan and be on the same page.”

“That’s always been one of my big things is communication with the excavator,” Jensen adds. “That's what's saved me from damages.”